Looks like Neil Walter at the council doesn't really have a clue as to what his staff are up to.  He assured me last time that this was unacceptable, yet here we are again....


I dropped another note to Neil in the hope that he'd take action, but as before he has gone on the defensive.  What a shame we can't find people with some sense of accountability to work in our public services.  Here's the email trail - would you say, looking at the video, that they were too far away to see the van parked illegally?  And given traffic had to stop as the van forced the road down to one lane, would that not have drawn their attention?

I'll give them one more shot - lets hope Neil sticks a rocket up the ar*e of all the traffic wardens and reminds them that a yellow jacket doesn't mean they're above the law.

Spotted this while popping into a tyre fitters down Market Street in Bracknell.  This is a SITA bin lorry, parked across double yellow lines, no driver, and left running.

I saw the driver coming out of the nearby chippy, but was on the phone at the time so couldn't take another snap.

I've left the number plate visible, in the hope that someone at SITA realises that leaving a running truck on double yellow lines with no-one on board is a stupid thing to do, and has a word with the driver or crew.  Or will they take the same attitude as their operatives, and struggle to raise enough motivation to even give a monkeys?! 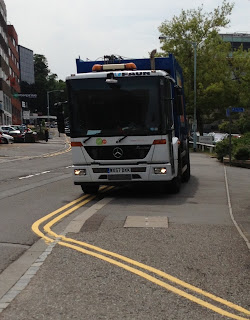 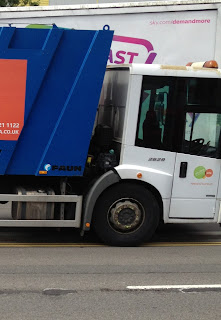