I had a letter in the post today, from none other than the Prime Minister!  I've scanned it and you can read it by clicking on the picture below.  Best do that now, eh, before reading my response!

And here's my reply, sent today...

Thanks for your undated letter regarding the Employment Allowance, to which I refer.

Your opening paragraph is my first bone of contention.  I was under the impression that charities, doing good work for the population at large and funded by the meagre leftovers taxpayers can afford to contribute after they've handed over the best part of 70% of everything they earn in taxes, were not fleeced by the government in the same way as commercial enterprises.  From your letter, it seems that might have been a naive assumption.

So essentially, here's what I think you're telling me, and let's take Help for Heroes as an example.  We send our men and women off to fight in conflicts around the globe (and for the purposes of this discussion, lets ignore the fact that the only reason they're sent is to protect our access to natural resources.  It's certainly not to allow the nations in question to achieve peace and democracy, otherwise why aren't we wading into Zimbabwe and the like?!).  When they then return home injured, maimed, limbless and in the most awful cases no longer with us, the government arrogantly and heartlessly chooses not to provide them and their families with the support, care and assistance they need.  Instead, they have to rely on charities such as Help for Heroes, even though they risked their lives for our country.  That in itself turns my stomach and makes me ashamed of the way my country treats those who offer to sacrifice themselves for its cause. But now you tell me that in fact, those people working for Help for Heroes, providing the lifeline these men and women need, are then having to pay NIC contributions, and somehow you're trying to be the hero by suggesting that a reduction of £2,000 per annum (and not per person, thats the entire charity), should elevate you to the moral high ground?  What morals do you have, if any?

Your second paragraph then talks about how tough it has been recently, what with the recession and the bank bailouts.  Well, I do agree - it has been tough, but not for the banks!  The primary reason banks found themselves in hot water was down to the government allowing a light touch regulatory framework within which the banks were allowed to take greater and greater risks, until the walls came tumbling down.  What did you do at that point?  While cutting public services by £6bn for all those paying for the bailout, you then took our money and gave over £200bn to the banks.  Nice.  What happens if I take stupid business risks and end up on the ropes?  Do I get a bailout too?  No, I didn't think so.

I'll skip paragraph three, as that's clearly a 'keep repeating and they'll buy it' statement.  If Tom and Jerry had won the last election, they'd also have to have a long term plan for the economy.  When your arse is on the floor, the only way is up!

Paragraph four starts badly.  Thanks to my hard work, you are seeing the results.  Well it's certainly not thanks to your hard work is it?  Given that most people are working from Monday till Thursday lunchtime to line your pockets, while Thursday afternoon and Fridays efforts they can keep themselves, you should be grateful they haven't yet risen up and told you to stick your tax bill up your shiny, polished, well worn public school hoop.  But it's only a matter of time, Dave, only a matter of time...

You go on to point out that businesses are telling you they want to invest and grow, and that this £2,000 is part of that plan.  Er - hello?  What planet are you currently on, Dave?  When businesses need to expand and grow, just the costs of hiring someone would be more than £2,000 in many cases.  What businesses really need to grow is having a bank that acts like a partner, rather than a money vacuum.  Perhaps if you had a stronger regulatory framework for the banks, you could insist that they lend to profitable SME businesses if they want to be protected from their own reckless, stupid decisions by the taxpayer.  That would be common sense though, and I guess you can't have that.  Why not just give them the bailout, ask them to lend it out but not actually force them to do so when they refuse, and then watch as they dish out the cash to their staff as bonuses or 'salary adjustments' to get round the rules?  Nothing like rewarding failure, eh?!

Your next paragraph made me roll around on the floor laughing.  If I didn't, I'd have to assume that you are a complete, utter, contemptuous moron, and you keep telling me you're on the ball, so who knows?  But to claim that £2,000 could be used to hire more employees is simply beyond the pale!  Now I know you'll claim that you have interns and the like earning less than that, and you're probably right.  The difference is, they're not relying on that to live, pay bills, buy a house, you know, all the normal things people do, as they're still either living of their wealthy parents, or the inherited wealth that's required to get a seat on the good ship Tory.  However, back in the real world, where most of us reside, £2,000 gets you roughly nada, nowt, nothing.  It certainly doesn't allow me to consider hiring one new employee that I wouldn't have before, never mind multiple employees (and you did put an s on the end of employees on purpose, right?)

Simplicity seems to be the key message for paragraph five.  So tell me, if it's so simple, why isn't every small business currently paying NIC's enrolled automatically, saving us the cost and overhead of having to apply?  I guess it's because you can then claim to be doing 'something for the economy' when really you're hoping that apathy kicks in and only a small number of businesses register, and you avoid losing all that lovely taxpayers cash that you'd rather lavish on your banking buddies, vanity projects, or more 'fines' to the EU because we haven't done this, that or the other.

The rest of the letter is simply pointless repetition and pleasantries to try and make you appear 'supportive', when in reality we all know this is just shuffling the deck chairs on the Titanic.

I'm not stupid - of course, I'll take all the help I can get as we fight against red tape, excessive taxation, ludicrous rules thrust on us by unelected, unaccountable EU bureaucrats and our own weak economy to grow our business.  I just urge you, in future, to reconsider sending me letters like this before trying to view the content while walking in my shoes.  I'd imagine there are business owners up and down the country who, like me, would prefer to see you get on with something useful rather than blowing your own trumpet while the ship is sinking.

If hands that do dishes were as soft as your face...

Here's a little gem - these two bottles of Fairy washing up liquid were on the same shelf in Waitrose, at the same price, for the same product, in the same volume. 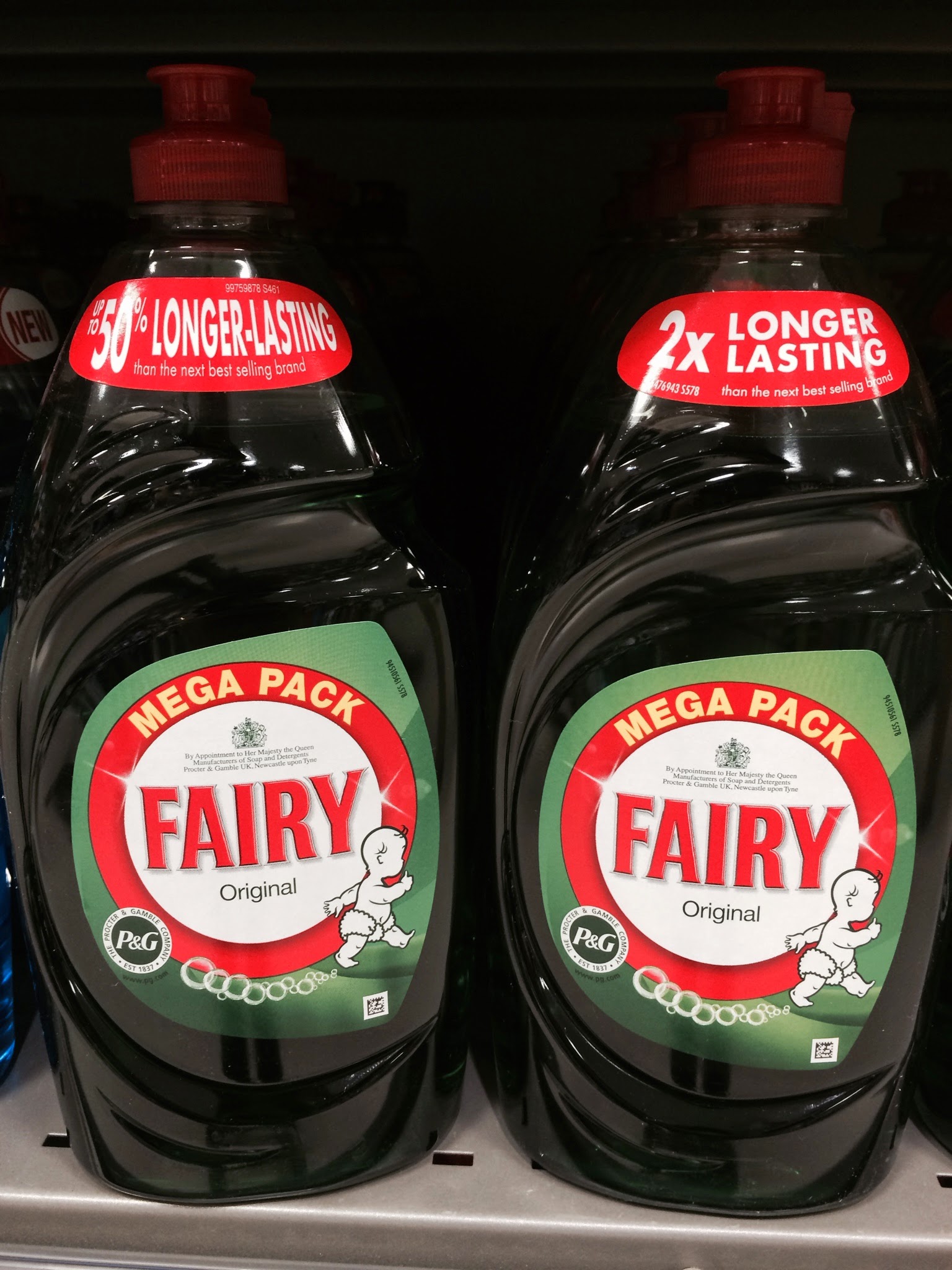 But look - one suggests it's 'Up to 50%' better than the next leading brand, while the other says it's twice as good.  Ignoring the fact that these stats are probably plucked out of the air in a pretty unscientific manner, how can one bottle deliver a third more washing power than the other?

Let me tell you how - Proctor and Gamble consider their customers to be morons, who'll believe anything they're told, so they'll stick any old claim on the bottle, no matter if it's true or not - as long as they sell more, more, more.

Which is why I chose the Waitrose own brand instead....